Welcome to the Stan Straub Official Website where you’ll find out all about me and my books.  My motto is: “I’m changing the world one word at a time.”

Stan Straub’s previously published book, “The Trail in the Woods”.

The Trail in the Woods is a book that I wrote prior to The Terminus List.  It’s a thriller that will captivate you and carry you from the opening chapter to the unexpected ending.  Along the way, you will encounter an electrified greenish-yellow fog and then you will meet humans with gills.  You will meet the Tribulator, a creature that runs the Valley of the Gods and thinks he is God.  The valley is an environmentally perfect place that the Tribulator established.  Two people, Bob and Janet, get captured and taken to the valley.  They are locked up in the valley and coerced into helping promote the Tribulators brand of religion.

The Trail in the Woods is a frightening book that leads us to a possible future world waiting for all of us.  The fate of the world hinges on whether Bob and Janet can escape from the valley and the powerful Tribulator.

I’m on Marlena Smith’s “FeatureFriday” blog as a guest blogger.  Check it out. 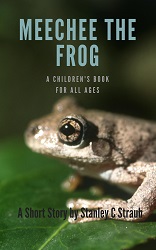 The Trail in the Woods (Chapter 1)

That’s Not How Cookies Are Made! (Year-end Short Story Contest Entry)

Stan Straub is a masterful author that loves writing all genres and poems.  He is a multi-volume, multi-genre author that is a member of the Rave Reviews Book Club and specializes in Science Fiction.

The Killer Within – Medical Thriller

Description:  People are dying in the small rural town of Plumwood, Oregon. Doctor Richard Anderson an investigator for the CDC in Atlanta, Georgia is sent to investigate. Dr. Anderson’s investigation leads him on an adventure that uncovers the real killer, which is something more terrifying than anyone could ever have imagined.  Come along for the exciting adventure and experience the frightening story.  It will have your skin crawling and keep you glued to the pages.

Description:  The Segmented Tail is a gripping Science Fiction suspense thriller written in the vein of a Dean Koontz and Stephen King novel.  The story starts in the small fictitious town of Bounder, Arizona.  Creatures are seen that make screeching sounds and they scare and kill people in Bounder.  When people are murdered, two detectives are assigned to investigate.  The detectives fear for their lives as they get deeper and deeper into the investigation.  What they uncover is something that no one could ever have imagined, aliens created by two animal experts accidentally mixing up alien DNA from Area 51 with Dinosaur DNA.  The story winds its way from beginning to an exciting and unanticipated conclusion.

The Trail in the Woods – Science Fiction

Description: Something or someone has encapsulated an entire valley on Earth. The valley is called “The Valley of the Gods” and is given a perfect environment for people to live in. The valley is like a Garden of Eden and designed as an ideal place for an experiment. People hiking on a trail towards the valley have disappeared over the years and never been heard from again. Even the search parties that went looking for the missing people disappeared. Something evil lives on the trail and controls the valley. Two childhood friends set out on a courageous adventure to hike the abandoned overgrown trail to see if they can find out what has happened to the people. The two hikers have to use machetes to get through the thick brush on the trail. While on the trail, they are captured and are taken to the valley to live. In the valley, they meet people with gills and come face-to-face with the one who runs the valley, “The Tribulator”. He’s a Charles Manson type who thinks he is God. It’s a fight for survival for the two hikers as they fight the evil forces controlling the valley. The fate of humanity hangs in the balance as the two hikers fight for their lives. https://thirstyauthor.com/book.php?b=24135&nbsp;

Description:  At the year-end extravaganza held in the year 2999, Brad Florin became a statistic.  He was terminated by liberated punctuation, a fancy made-up term for killed to keep the population under control    One year later, in 3000 the names of the new chosen ones were published for all to see.  Whose names will be listed and who will get to go to the extravaganza parade and then be led to the glorious extermination stations during the Super Sunday halftime celebration.  Barbara Freeman, Age 16 was one of the “supposedly” lucky names chosen for the 3000 Millennium celebration, which is to be held during the Super Sunday halftime show.  During the show which will be broadcast for the world to see, Barbara and several thousand more are planned to be terminated.  Most of them are willing and happy to be part of the termination process, but Barbara and her folks are not.  Can Barbara escape her impending fate?

A Grandma for Nicole – A Year-end Kindle Book Christmas Story

Description: This is a true fish story (at least Wally told me it was) about Walter “Wally” Tailfins encounter with John Sizemore, a fisherman in a boat on Fisherman Lake. Wally is a very smart, highly educated fish who truly understands all about humans and, in particular, fishermen. John Sizemore is tired of fishing and ready to head for home when Wally decides to make his presence known. John sits speechless in his boat and stares at the water as Wally gives him an earful.

Description: Bobby McDane is a young boy that is on a mission to locate the last remaining unicorn. He found out that he had the ability to fly at an early age. Bobby uses his power to fly all over the world in search of the only known unicorn in existence, Flora. Flora was in a sanctuary and was taken by the evil Dr. Vile. The doctor took Flora somewhere. Bobby thinks he knows where they went from the clues that he found in the book left by the wicked doctor. Bobby accidentally stumbled upon the doctor’s book while helping his mom clean the doctor’s home. Bobby thinks that he found clues in the book as to where Flora was taken. He tries to tell people about what he found, but no one will listen. Now, he’s on his own to try to rescue Flora. It’s up to Bobby to find and save Flora and in turn, save the world from the evil doctor.

For your enjoyment, Bobby McDane and the Missing Unicorn. Chapter 1 Excerpt

Do you recognize this dog? This is the world-famous dog named Milton. You’ll get to meet Milton and his two companions, Bobby and Sarah, as they go in search of Flora, the missing unicorn. Milton rises to fame in my latest book that I’ve written, Bobby McDane and the Missing Unicorn.

Author’s note:  This is a fun-filled book with lots of adventure and features to lift the spirits of both young and old.  I had lots of fun writing the book and I hope that you have lots of fun reading the book.

Have you ever met a friendly Slitheron, one named Freddy? You will in my latest book, Bobby McDane and the Missing Unicorn. Available on Amazon.com and you can get a signed copy here.